The spherical diffuser design is enhanced by a removable-fitting and tapering luminous stem, that makes the transition from the strong diffuser light to the blind lamp structure area gentle. Castore 25, 35 and 42 have a touch dimmer button on the lamp base for the storage of the latest light intensity set-up or the use of a local or remote control (controlled socket). Base in zamac, stem in thermoplastic resin, blown glass diffuser. 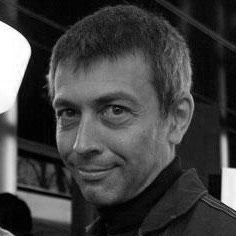 Born in the Netherlands in 1964

Huub attended the Gerrit Rielvield Academy in Amsterdam where he got his Design diploma in 1993. Came to Italy in 1992 for a stage at Studio Cappelli&Ranzo in Naples, then moved to Milan.

Ubbens is a professor at the Vanvitelli Architecture University of Naples, the Architecture Polytechnic of Milan, the Sustentare school of design strategy of Sao Paulo (Brazil), the EID of Toulon (France), the La Sapienza University of Rome, the Polytechnic Design School “SPD” of Milan, Artfure of St. Petersburgh (Russia), CMA of Santiago de Compostella (Spain), Ensam of Montpellier (France), and Ecole des Beaux Arts de Toulouse