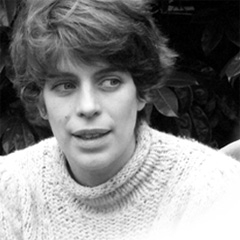 Juliette Liberman trained as a cabinetmaker and has worked abroad, in particular in Burkina Faso at the Olorun Foundation (a centre that promotes contemporary African art and design) and with a carpenter in Ireland. With her training at the École Boulle and the École Nationale Supérieure des Arts Décoratifs, she is able to apply her expertise with wood and other materials such as lacquer and metal to the furniture she creates.

In addition to the Charivari bench, she has designed the Iris Armchair and the Ginkgo Biloba (or Tree of Knowledge) bookcase. She has also co-designed a “hand cup” with Joachim Jirou-Najou and conference pulpits with Marion Biais-Sauvêtre. Juliette Liberman has recently become interested in the concept of the seat envelope. Her responses to this problem are, as one would expect, warm, serene and inspired.

The prototype Charivari bench, with a seat envelope initially made from wood, was her final graduation piece, which she presented to the ENSAD panel in 2004. The design is the result of her exploration of wood-working techniques, using the same steam-bending procedure traditionally employed by shipwrights to construct the ribs of boats.