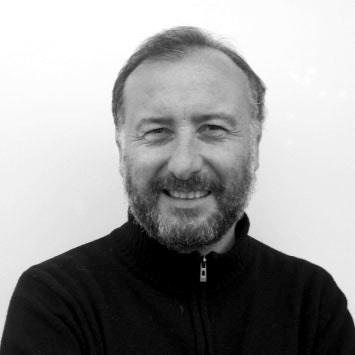 Paolo De Lucchi was born in Padua in 1962 and graduated in Architecture at the Polytechnic of Milan in 1989. In 1990 he exhibited at the Palazzo dell’Arte (Triennale di Milano) “The Interactive table” at of the exhibition “The party game”. Between 1989 and 1993, he collaborated with “Sottsass Associati” by working on various projects of architectural character (Yuko house, House Bishofberger, Twin dome City competition), interior design (offices Cementeria Merone, preparation Uomomoda 1990 in Tokyo, View of African objects “Kings of Africa” in Maastricht) and industrial design (Seiko watches, handle Valli & Valli, chair for Zanotta).

In 1994 he began cooperating with Michele De Lucchi, participating in the development of architectural projects and relief by managing firsthand the design of the new showroom for Olivetti in Ivrea, as well as the events related to the Annual General Shareholders Olivetti and workshops with Philips on the evolution of technology.