With huge visual impact, the vanguardist rug makes use of one shape, in two sizes and one color, to make your jaw drop. Simple and striking, its jagged circular outline recalls graphic techniques used in advertising. The intense red captures your undivided attention and gives it the sense of now, action-packed, which it possesses. Its borders draw dynamism on the floor, giving its surroundings a new shape, ingeniously delimiting a circle where there is only room for good news. 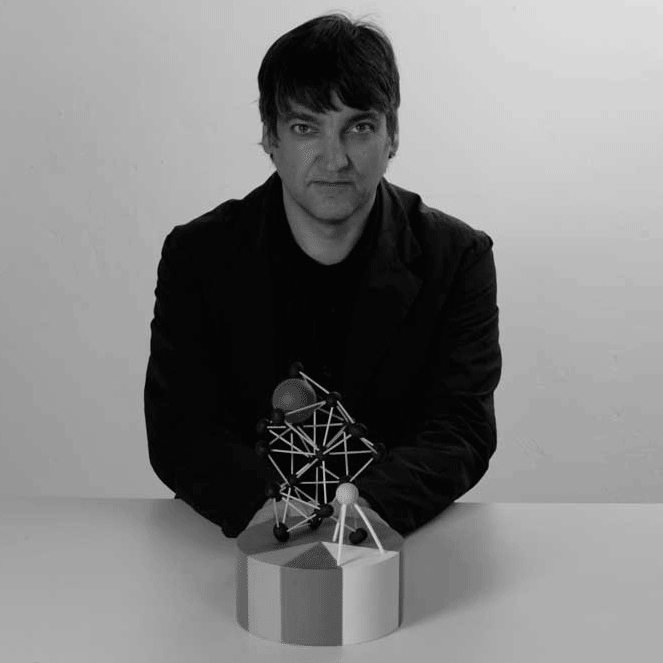 "There are several products in which the shape is not important and the function is more important. I think the way to do that is working basically with ideas, so that the shapes and materials become anecdotal." - Martí Guixé

Martí Guixé is a Spanish designer living in Barcelona and Berlin. He graduated in interior design from Elisava in Barcelona in 1985 and enrolled in an industrial design study program in Scuola Politecnica di Design di Milano in 1986. In 2001, as a statement against the limited scope of the traditional designer and to open new possibilities for the industry Guixé started an ex-designer movement, defining himself by the same name.

Guixé is very outspoken in his dislike of design as stylized object and form. Rather than reshaping existing products Guixé’s work claims to alter ways of seeing and thinking. Design to Guixé needs to evoke constant evaluation of the parameters of function and active engagement and reinvention on the part of the consumer. It should be firmly rooted in contemporary experience and not linger in past structures of functionality. Because of this critical and provocative attitude his work is sometimes associated with the critical design movement, popularized by Fiona Raby and Anthony Dunne, but in general is more playful and less moralistic.

His non-objective approach is reflected in the frequent use of disposable or cheap materials and the quick and ephemeral character of much of his work. The final design often seems only one outcome of innumerable possibilities.

An integrated part of Guixés conceptual approach is his interest in design as a platform for questioning, visualising and influencing contemporary human behaviour. With a focus on patterns of consumption, exchange of information and the process of choice.

Guixés sensitivity towards materials that are quick, readily available and oriented towards mass consumption led him to become an important innovator in food design. He understood food design as a way to re-evaluate and redesign the structure around food, the industry and the consumer. Void from nostalgia, food for Guixé is primarily an edible designed product, an object that negates any reference to cooking, tradition and gastronomy.