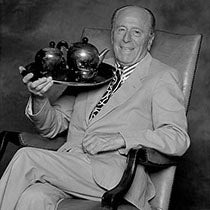 “For us young people factories were more interesting than cinema because we could see them express our ideas..."  - Carlo Alessi

Alessi originated from humble beginnings. Giovanni Alessi, Carlo’s father, founded Alessi in 1921. Giovanni was creating nickel, aluminum and silver-plated brass utensils and dishes in his workshop in the Italian Alps. Carlo, trained as an industrial designer, joined the business in the 1930s.

Carlo’s famous products include the Bombe teapot, the oil cruet and the Parmesan cheese dispenser. The Bombe service has become a collectable and is still the most popular tea and coffee set sold by Alessi. Carlo became General Manager in the 1950s and he began to form partnerships with external designers such as Luigi Massoni, and later with Richard Sapper, Achille Castiglioni and many other international design super stars.

Gradually Alessi moved to using stainless steel to produce its objects, making the transition from artisanal craftsmanship to mass production. Today Alessi is an international company that continues its tradition of promoting the very best design while forever reinventing itself.