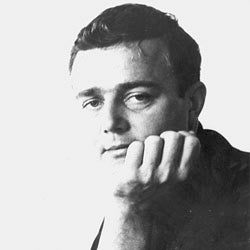 After graduating from Pratt Institute and working with George Nelson, he approached Florence Knoll, a celebrated designer who had studied under Mies van der Rohe. She initially refused to meet with him but relented after an interior design magazine published an article about him. On the day of his interview with her, he brought along a prototype of a lounge chair he was working on and collided with her as she was coming out of the elevator, knocking her down with the chair. She hired him anyway.

He soon talked Mrs. Knoll into paying $20 a month for a studio in a run-down part of Brooklyn, where he worked on the executive chair for five years, making it over and over again, improving it each time. The Pollock chair, made of leather and chrome, was an immediate success and came to be a mainstay of the modern office.

Pollock again demonstrated his command of line and material when he conceived the 1250 series executive collection, introduced in 1965. His idea for the chair was to use an aluminum “rim,” which outlined the chair as the main structural and design element. The resulting design was an achievement in structure and aesthetics, and the chair remains a Knoll classic to this day. The chair is still prized by collectors. Even though the royalties he earned from the chair decreased the need to work, Mr. Pollock kept designing and making paintings and sculptures.