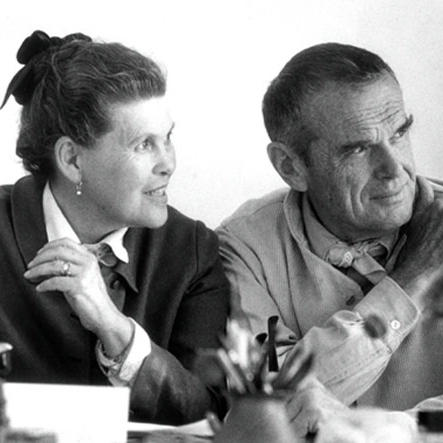 The prolific body of work of Charles and Ray Eames, which spanned from 1941 to 1978, extended well beyond their major achievements in furniture design, graphic design, architecture and film. Their influence on the aesthetic and social aspects of design made them two of the greatest industrial designers of our time.

Born in St. Louis, Missouri, Charles Eames grew up in America’s industrial heartland. As a young man he worked for engineers and manufacturers, anticipating his lifelong interest in mechanics and the complex working of things. Ray Kaiser, born in Sacramento, California, spent her formative years in New York’s modern art movements and participated in the first wave of American-born abstract artists. They met at the Cranbrook Academy of Art near Detroit in 1940. Cranbrook’s creed of better living through better design shaped their sensibilities and their shared agenda. They married in 1941 and moved to Los Angeles as the city was gearing up for World War II. Wartime experiments with new materials and technologies inspired the Eames’ low-cost furniture for Herman Miller and expanded ways for designers to work with industry.

In LA, they conducted plywood experiments in their apartment. The US Navy order enabled the Eames to rent an office on Santa Monica Boulevard in 1942 and to gather a group of collaborators including Harry Bertoia. They produced sculpture, chairs, screens, and tables in plywood. Herman Miller, the US furniture group, was persuaded to put some of these pieces into production by George Nelson, its head of design. All the Eames’ plywood furniture combined an elegant organic aesthetic with a love of materials and technical ingenuity. After the success of the plywood pieces, the Eames focused on other materials, creating furniture in fiberglass, plastic, aluminum and, for the 1956 lounge chair, leather and rosewood. The Lounge Chair became an icon of the 1960s and 1970s, becoming a must-have for all hip executives.

Their collaboration with Herman Miller continued and extended to Vitra, its European partner. Charles and Ray were equally influential at making respectable the then-neglected folk crafts not only in the US but also in India. These concerns dominated their later work in the 1970s when, able to live comfortably on their Herman Miller and Vitra royalties, they concentrated their creative energy on propagating their ideas in exhibitions, books and films.

Charles died in 1978 and Ray worked hard to complete any unfinished projects but having done so, did not seek new ones. She devoted the rest of her life to communicating their ideas through talks and writing. Ray Eames died in 1988, ten years to the day after Charles.