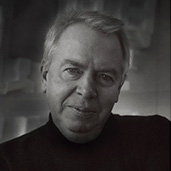 Chipperfield was born in London in 1953, and graduated in 1976 from Kingston School of Art in London. He studied architecture at the Architectural Association (AA) in London, receiving his diploma in architecture in 1977. He worked in the offices of several notable architects, including Douglas Stephen, Norman Foster and Richard Rogers, before founding his own firm, David Chipperfield Architects, in 1985. As a young architect Chipperfield championed the historically-attuned, place-specific work of continental architects such as Moneo, Snozzi and Siza through the 9H Gallery situated in the front room of his London office.