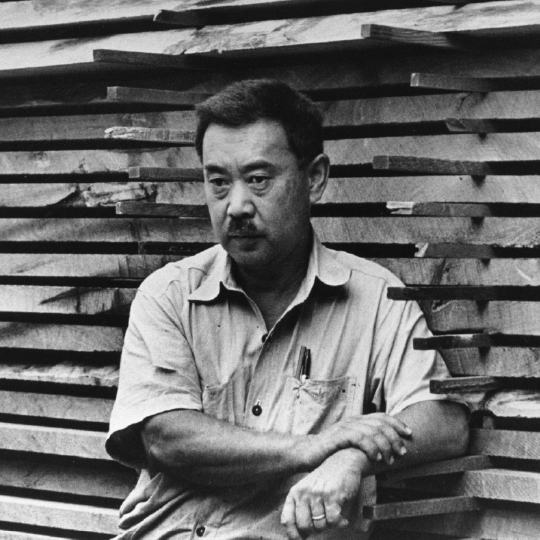 Born in Spokane, Washington in 1905, George Nakashima received a Bachelor degree in architecture at the University of Washington and a Masters degree from MIT in 1930. After spending some time in Paris, he traveled around the world and secured a job at the architectural offices of Antonin Raymond in Tokyo, which sent him to Pondicherry, India, where he was the onsite architect for the first reinforced concrete building in that country.

When the Second World War broke out he returned to the U.S. and was sent to the interment camps in Idaho with his infant daughter and wife. In 1943, Antonin Raymond successfully sponsored Nakashima’s release from the camp and invited him to his farm in Pennsylvania where he built a studio and workshop.

Nakashima explored the organic expressiveness of wood and choosing boards with knots, burls and interesting grain. He designed furniture lines for Knoll, including the Straight Back Chair, a modernist take on the traditional Windsor chair. Drawing on Japanese designs and shop practices, as well as on American and international modern styles, Nakashima created a body of work that would make his name synonymous with the best of 20th century American Art furniture.