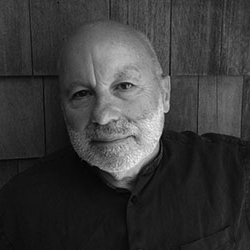 Born in New Jersey, D’Urso’s design education began at the Pratt Institute, where he graduated in 1965. D’Urso got his start in New York working as an assistant to Ward Bennett, who he credited with inspiring his own “total design” approach. He went on to become a Fellow of the Royal College of Art in London, and began his own practice, D’Urso Design, in New York in 1967. Throughout the 1970s and ’80s, D’Urso became famous for his spare, minimal interiors, for which he was hired by scores of private clients, as well as design-centered companies like Calvin Klein and Esprit. His embrace of industrial materials was a critical step in the evolution of modernism.

D’Urso designed his first furniture collection for Knoll, Inc. in 1980, leading his generation in collaborating with the legendary manufacturers. That collection, which D’Urso described as “casual and physical,” included a sofa, as well as high and low tables. D’Urso takes the same clean-lined approach to furniture that he took with his interiors. He reconnected with Knoll in 2008 to introduce the D’Urso Collection.