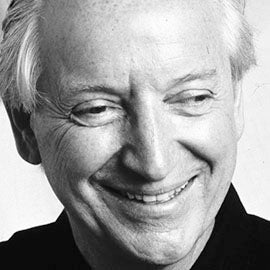 Michael Graves was born in Indiana in 1934. An American architect and designer, he was one of the principal figures in the postmodernist movement.

Graves trained to be an architect at Harvard, earning a master’s degree in 1959. Graves began his architectural career in the 1960s as a creator of private houses in the abstract and austere style of modernism. In the late 1970s, however, Graves began to reject the bare and unadorned Modernist idiom as too cool and abstract and he began seeking a richer architectural vocabulary that would be more accessible to the public.

He soon drew attention with his designs for several large public buildings in the early 1980s. The Portland Public Service Building in Portland, Oregon and the Humana Building in Louisville, Kentucky, were notable for their hulking masses and for Graves’s highly personal, Cubist interpretations of such classical elements as colonnades and loggias.

By the mid-1980s Graves had emerged as arguably the most original and popular figure working in the postmodernist idiom. He executed architectural and design commissions for clients around the world. In the early 1980s he created a playful and iconic teakettle for the Alessi design firm and he later created a line of household items, including kitchenware and home accessories.

In 2001 Graves was awarded the American Institute of Architects Gold Medal (AIA) for lifetime achievement.