Jens Risom's designs were the first pieces conceived for and manufactured by Knoll. Due to wartime material restrictions, the side chair was originally constructed of simple maple frames and discarded parachute webbing. Described as good, honest furniture design, the collection helped establish Knoll as an early source of modern design in America. 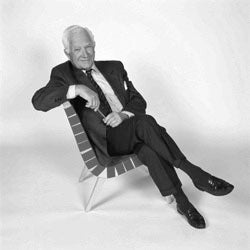