Marcel Breuer described how he came to begin experimenting with bent tubular steel while at the Bauhaus:

“At that time I was rather idealistic. 23 years old. I made friends with a young architect, and I bought my first bicycle. I learned to ride the bicycle and talked to this young fellow and told him that the bicycle seems to be a perfect production because it hasn’t changed in the last twenty, thirty years. It is still the original bicycle form. He said, “Did you ever see how they make those parts? How they bend those handlebars? You would be interested because they bend those steel tubes like macaroni.”

“This somehow remained in my mind, and I started to think about steel tubes which are bent into frames—probably that is the material you could use for an elastic and transparent chair. Typically, I was very much engaged with the transparency of the form.”

Like his Wassily and Cesca chairs, Marcel Breuer’s Laccio Tables are critical to the story of 20th-century design. Breuer’s use of tubular steel to define lines in space—beautifully exhibited in these simple nesting tables—revolutionized furniture construction and inspired many subsequent generations of designers. 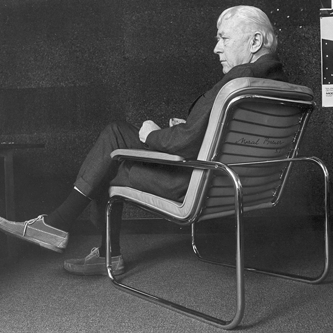 Marcel Breuer trained at the Bauhaus in Weimar, Germany and is heralded as having produced the first tubular steel armchair, his pieces pioneering the demand for tubular steel furniture throughout the 1920s and 1930s. These pieces, along with his innovative laminated wood furniture and his unique architectural interpretation of light and space yielded a great deal of international respect and inspired the work of a wide range of designers.

Breuer studied under Walter Gropius at the Bauhaus from 1920-24. When the Bauhaus moved to Dessau in 1925, Breuer designed furniture for the new campus and became head of the furniture workshop. Also in 1925, Breuer created the famous tubular steel Wassily chair, made for Wassily Kandinsky’s space in Dessau. It made the user look as though they were floating on the seat within the steel cube frame. The chair was innovative in that it was extremely light and was built entirely from ready-made tubes that were welded together.

In 1928 Breuer started a private practice in Berlin and came out with his Cesca cantilever chair, inspired by Mies Van der Rohe. A 1936 molded plywood chair he made inspired the work of the Eames a decade later and his nested tables revisited the form he had produced earlier in steel.

In 1937 Breuer moved to America and worked as an architect with Gropius in Massachusetts. From 1937-1947 he taught architecture at Harvard, and was commissioned by his former student Eliot Noyes to design buildings for IBM.

Breuer is seen as one of the forefathers of the energetic aesthetic of uninhibited experimentation combined with a high standard of artistry that the design industry enjoyed throughout the second half of the century. Breuer retired from active practice in 1976 and died five years later, in 1981.