Two examples of Noguchi's predilection for sculptural lines are his Freeform Sofa and Ottoman, the shapes of which are reminiscent of river pebbles. Noguchi himself described his design as "soft rock". Thanks to its organic shape and the natural tones of its upholstery fabric the sofa has a light, elegant feel, despite its voluminous form. Vitra Design Museum Collection 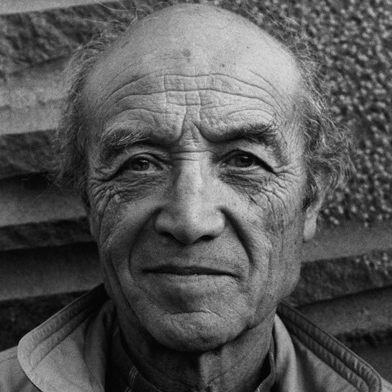 “The art of stone in a Japanese garden is that of placement. Its ideal does not deviate from that of nature…but I am also a sculptor of the West. I place my mark and do not hide.” – Isamu Noguchi

Isamu Noguchi was born in Los Angeles in 1904 to an Irish-American mother and Yone Noguchi, a Japanese poet. In 1906, Noguchi’s mother took him to Japan, where he attended school. While in Japan, Noguchi gained an appreciation for its landscape, architecture and craftsmanship. Noguchi returned to the US and enrolled in Columbia University to study medicine, while at the same time taking sculpture classes on the lower east side of New York City. It wasn’t long before he realized that art, not medicine, was his true calling. His interest in abstract art led him to Paris where he met and worked with the great modernist sculptor, Constantin Brancusi.

After World War II, Noguchi returned to Japan and found a community of young artists eager to take part in the optimism of his new ideas. He continued to make individual sculptures, but was also given the opportunity to work on larger site-specific pieces.

His classic designs — notably his Akari lamps and his free-form coffee table — have never been more popular. In New York, weary urbanites take tranquil refuge in the delicate light and shadow of the Isamu Noguchi Garden Museum. He has gardens in Paris, Jerusalem, and New York and outdoor sculptures and environments in seventeen American cities. In these beautiful, spiritual, and finely constructed works Isamu Noguchi has created a dynamic testament to the ties between East and West. Noguchi died in December of 1988 at the age of 84, but his influence continues to spread.

You may also be interested in the following product(s)